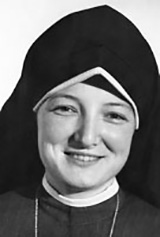 Margaret Helen Monroe was born on August 8, 1929, in Dayton, Ohio. She entered the Maryknoll Sisters, making her First Profession of Vows in 1955. She made her Final Profession six years later. When she was sent to Tanganyika (now Tanzania) in 1963, she first worked at Isango Middle School in Musoma Diocese. Most of her ministry in the country, however, was at the Makoko Family Center, where she worked from 1969 to the late 1990s. The Center focused on the development of the entire person, and therefore offered classes on the Bible, gave training in farming, animal husbandry, and child care, and sponsored many income-generating projects. After spending thirty-five years in Tanzania, Sister Monroe returned to New York, where she passed away on April 21, 2008.