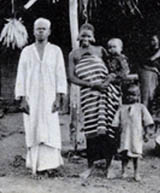 Paul Pera [1], also called Paulo Mwamribwa [2], was the founder of the first protestant mission school in the Gombero area in Digoland [3] from whence sprang the local congregation. The life and work of this man who later held a leading position among his people, the Digo, is a good example of how indigenous Christians were involved in spreading the Gospel in the early stages of Christian mission in East Africa.

He was born in the village of Mwamwande near Moa, north of Tanga town in the 1880s. It was not common to record the exact date of birth in his cultural context at that time. In his short autobiography [4] he wrote about the time of njaa ya jamvi (“hunger of the mat”) [5], a famine shortly after his birth which, like other important events was a landmark in the flow of time. Paulo grew up in a Digo family probably following the local traditional religion. His mother’s name was Kuwaka binti Bindo his father Pera bin Chikolya [6].

As a young boy he lived with relatives in the village of Mwanzange near Tanga town for some time. Visiting the mission school there he came into closer contact with the Christian faith. This school had been established by August Krämer [7], the first missionary of the Evangelical Mission Society for German East Africa (E.M.S) [8] on the north coast of the so-called German protectorate [9] at that time.

Paulo was impressed by the way the followers of Jesus Christ acted. Once, when he didn’t attend school because he was ill, a missionary sent children to fetch him and helped by giving him medicine. He was asked to come to Mbuyukenda, the mission center in Tanga town, for a further check-up after his recovery. When he arrived he described his feelings, saying, “When I arrived at Mbuyukenda I felt love” [10].

Later Paulo was a pupil at Mbuyukenda where he also enrolled in a course to prepare him for baptism. In 1899 [11] he was baptized there by missionary Martin Ostwald [12] together with five other local children and young men, among them Yakobo Lumwe, who later became the first protestant pastor on the northern coast of Tanganyika.

After his apprenticeship with a German master carpenter and further vocational training in the nearby Usambara Mountains he practiced his trade in Tanga town. In 1902 he married a Digo girl named Doro binti Tifu who had been baptized the same year. [13] During the following months he wrote about the strong calling he felt to preach the gospel to his people, the Digo, “Each time my spirit tells me, why you forget the Digo, your tribe… Why don’t you go to Digoland?” [14] After some discussions with Ernst Liebau [15], the missionary there at that time who wanted him to stay in Tanga, Paulo obtained his agreement to leave.

The same year Paul Pera moved to Digoland, to the village of Manyinyi in the Gombero area, where he had already lived with his parents for some time. He went on working as a carpenter and used the opportunity to tell the people there about his new faith and to preach to them. The inhabitants of the village, following either the traditional religion or Islam, soon expressed their wish for a school. Paulo agreed and, along with being a carpenter, he became a school master, teaching the children reading and writing as well as some arithmetic. Missionary Siegfried Delius [16] wrote in his report at that time: “The first schoolhouse was a small low hut in which the pupils, whose number rose from thirty-four to more than sixty until the end of 1903, very soon did not have enough room. Therefore the people built a nice spacious schoolhouse by their own means in the spring of 1904” [17]. The mission supported the new school by giving advice and sending their missionaries from Tanga town, approximately forty kilometers away, to visit the school on a regular basis. However, it should be underlined that the school in Manyinyi and the congregation there had been started at a local Christian’s initiative, namely Paul Pera, who can therefore be called an apostle to Digoland.

In 1905 the mission established a resting house near Vunde village–about a fifteen minute walk from the school–to make the visits of the missionaries easier and to strengthen the mission activities in the region. The following year Paulo was asked to move to this place to help establish a mission there. Only from 1911 on–approximately nine years after the beginning of Paulo’s mission activities in Digoland–did the German co-worker deacon Walther Bilstein [18] establish himself there permanently. In 1911 the first chapel in Digoland was inaugurated in Vunde [19] whereas in former years Paulo had had to lead church services inside the school or in front of it. As a main speaker in the celebration worship, Paulo emphasized his gratitude towards God, using words from the book of Psalms “Praise the Lord, my soul!” [20]

The first baptism of seven pupils, the fruit of this Digo apostle’s work, took place on December 2, 1906. Two years previously some of his pupils had enrolled in lessons to prepare them for baptism which Paulo himself taught. A fortnight before the baptism, the applicants came to Tanga town to take their final intensive lessons. At that time one of the teachers was Yakobo Lumwe, mentioned above. There, in the festively decorated church close to the Indian Ocean, the baptism service took place under the leadership of missionary Siegfried Delius who wrote in his report, “Paulo from Gombero had also come to this holiday of his pupils, his face gleaming with inner joy” [21] .

Paul Pera continued working as a teacher and preacher in Digoland until the end of 1912. In early 1913, he accepted an appointment from the German colonial government as an Akida, a kind of political agent in charge of a certain area. [22] At the end of his short autobiography, which unfortunately ends already with the year 1927, he says: “The one who wrote this book is me, Akida Paul Pera. I was the first teacher of the Digo mission, Gombero, from 1902 to 1913. From January 1 on I was Akida on behalf of the German government.” [23] In addition to this position he was also Jumbe Mkuu, main chief of the Digo in Tanganyika at that time.

During the British mandate (from 1919 on) he was dismissed for some time after being slandered by Muslims but later he regained office and dignity again. There were several legal proceedings against him but they failed to prove him guilty of anything. After one of these hearings he greeted his slanderers in his quiet and friendly manner. When one of them later asked him from whence he got the power to act that way, saying they (his Muslim opponents) would have treated their enemies very differently, Paulo took the opportunity to witness about Jesus Christ. [24]

After a very eventful life he died on November 18, 1952 and was buried in Vunde. The words from Luke 2:29 are still there on his gravestone: “Bwana, sasa umeruhusu mtumwa wako aende kwa amani” (Lord, now you are letting your servant depart in peace). For this Lord he lived and worked for the benefit of Digoland.

This article, received in 2006, was researched and written by Rev. Christian Pohl, a pastor of the Evangelical Lutheran Church in Bavaria, working as a regional representative for Northern Bavaria for the Division for World Mission. Rev. Pohl is writing his Ph.D., the provisional title of which is “Die evangelische Mission in Tanga und im Digoland (Tansania). Der Beitrag einheimischer Mitarbeiter zur Kirchwerdung, 1890 - 1940” (“The Protestant Mission in Tanga and Digoland (Tanzania). The Indigenous Church Workers´ Contribution to the Beginning of the Church, 1890 - 1940”). This article is based on an article he wrote entitled “Tansanische Apostel - Der Lehrer und der Pastor” (“Tanzanian Apostles - The Teacher and the Pastor”) in Länderheft Tansania, Weltmission heute 62 (Tanzania - Worldmission today, No. 62), Evangelisches Missionswerk in Deutschland (Hamburg 2006, p. 82 - 89), published by the Association of Protestant Churches and Missions (EMW) in Hamburg.