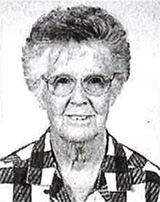 Katherine Anne Taepke was born in Detroit, Michigan, on September 17, 1921. She worked as a nurse in Detroit before entering the Maryknoll Sisters in 1950. Seven years later, she was sent to work in Tanganyika, where she served in several clinics, including one in Mwamapalala that she set up herself. After spending a time in the US and Ireland, she returned to Tanzania, where she worked with the Medical Missionaries of Mary in Makiungu and set up clinics herself in Bariadi. In the 1990s and early 2000s, she ministered to those suffering from AIDS and did pastoral work in Mwanza and Musoma. She later returned to the United States, where she passed away on February 28, 2012, in a hospital in New York.