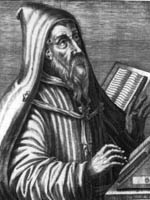 Latin patristic theologian and scriptural exegete; saint. Born in North Africa and educated there and at Rome, Augustine was bishop of Hippo from about 390 until his death. The theology he shaped dominated the West until the thirteenth century and greatly influenced the Reformation. His predestination views formed the foundation for various mission theologies and practices during those periods.

Augustine’s debate about free will with Pelagius empowered some missionaries with the conviction that without God’s gift of Jesus Christ and faith itself all non-believers were lost. Others took Augustine’s emphasis on God’s ordaining of some for salvation and others for damnation as devastating for missions because destiny was already decided. The important monastery of Lerins in southern France, beginning with John Cassian, represented an Eastern tradition in the West which rejected Pelagian extremes but saw Augustine’s predestinarian views as a dangerous innovation.

Augustine’s controversy with the Donatists was also thorny. He rejected their insistence on full purity for any sacramental act to be valid. He abhorred their violence but did not mind the thought of suppressing them through the use of Roman troops. At the very moment when a Punic-Berber contextualization of the gospel needed strong pastoral guidance, Augustine’s own Latin culture left him unable to see the possibilities.