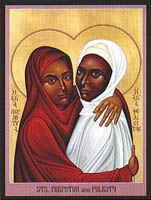 Felicitas and Perpetua, two young North African Christian women, and three companions were thrown to wild animals and killed for their faith at Carthage on March 7, 203. A gripping account of their last days remains, written by Perpetua, a twenty-two-year-old woman of noble birth and the mother of a small child.

A local Christian in Carthage collected the narratives and added a commentary, making this vivid account one of the earliest and most dramatic documents of martyrdom. The Passion of St. Perpetua, St. Felicitas, and their Companions was widely read in the early church as an instructional document on how Christians should face persecution.

Felicitas and Perpetua and their companions lived during a time of persecution of Christians under the Roman emperor Septimus Severus (193-211). Perpetua’s father was an elderly pagan, her mother a Christian. Felicitas, her household slave, was pregnant at the time of their arrest. The women were baptized and then led off to prison.

The young woman recalled the harshness of their life behind bars, and Perpetua was anxious for her small child as well. Eventually Perpetua’s mother was allowed to visit her with Perpetua’s young son, whom she was allowed to nurse and keep with her in prison. Meanwhile, Perpetua’s father tried to persuade her to abandon her Christian faith. At their trial the Christians refused to offer sacrifices to the Roman gods for the emperor’s safety. After being scourged, they were thrown to the wild beasts, the men to a boar, bear, and leopard, the women to a wild heifer. Once animals wounded them, the Christians were killed by swords. Perpetua wrote the following live-witness account:

A few days later we were lodged in the prison, and I was much frightened, because I had never known such darkness. What a day of horror! Terrible heat, owing to the crowds! Rough treatment by the soldiers! To crown it all I was tormented with anxiety for my baby. But Tertius and Pomponius, those blessed deacons who ministered to us, paid for us to be moved for a few hours to a better part of the prison and we obtained some relief. All went out of the prison and we were left to ourselves. My baby was brought and I nursed him, for already he was faint for want of food. I spoke anxiously to my mother on his behalf and encouraged my brother and commended my son to their care. For I was concerned when I saw their concern for me. For many days I suffered such anxieties, but I obtained leave for my child to remain in prison with me, and when relieved of my trouble and distress for him, I quickly recovered my health. My prison suddenly became a palace to me and I would rather have been there than anywhere else.

Then my brother said to me: “Dear sister, you are greatly privileged; surely you might ask for a vision to discover whether you are to be condemned or freed.” Faithfully I promised that I would, for I knew that I could speak with the Lord, whose great blessings I had come to experience. And so I said: “I shall tell you tomorrow.” Then I made my request and this was the vision I had:

I saw a ladder of tremendous height made of bronze, reaching all the way to the heavens, but it was so narrow that only one person could climb up at a time. To the sides of the ladder were attached all sorts of metal weapons: there were swords, spears, hooks, daggers, and spikes; so that if anyone tried to climb up carelessly or without paying attention, he would be mangled and his flesh would adhere to the weapons.

At the foot of the ladder lay a dragon of enormous size, and it would attack those who tried to climb up and try to terrify them from doing so. And Saturus was the first to go up, he who was later to give himself up of his own accord. He had been the builder of our strength, although he was not present when we were arrested. And he arrived at the top of the staircase and he looked back and said to me. “Perpetua, I am waiting for you. But take care; do not let the dragon bite you.” “He will not harm me,” I said, “in the name of Christ Jesus.” Slowly, as though he were afraid of me, the dragon stuck his head out from underneath the ladder. Then, using it as my first step, I trod on his head and went up.

Then I saw an immense garden, and in it a gray-haired man sat in shepherd’s garb; tall he was, and milking sheep. And standing around him were many thousands of people clad in white garments. He raised his head, looked at me, and said: “I am glad you have come, my child.” He called me over to him and gave me, as it were, a mouthful of the milk he was drawing; and I took it into my cupped hands and consumed it. And all those who stood around said: “Amen!” At the sound of this word I came to, with the taste of something sweet still in my mouth. I at once told this to my brother, and we realized that we would have to suffer, and that from now on we would no longer have any hope in this life.[1]

Holy God, as you gave great courage to Perpetua and Felicitas and their companions, so grant that we may be worthy to climb the ladder of sacrifice and be received into the garden of peace, through Jesus Christ our Lord. Amen.–Celebrating Common Prayer, 437

“Church History Documents: The Martyrdom of Perpetua and Felicitas,” www.churchhistory.net/documents/perpetua.html.