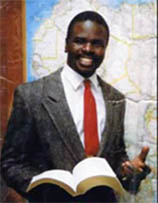 John Deogratias Balabyekubbo led a healing ministry in the late 1980s and early 1990s. Balabyekubbo founded Prayer Palace Christian Center in Kampala and led crusades in which people testified to miracles, including healing from HIV/AIDS.

Deogratias Balabyekubo was born to Silas Sajjabi and the late Immaculate Nansubuga in Nazigo village, Kayunga district. He went to Spire Road Primary School in Jinja for his primary education and to Jinja SS for his secondary education. He then joined his father in Kampala and started working in his shop at Barton Street,Plot no. 6, where his father worked as a locksmith dealing in keys duplication, locks, and safes.

In 1979 he got into repeated arguments over the reality of God with some young men who were born again. Balabyekubo argued that God was not real, saying, “If God is real and merciful, how could He have allowed Idi Amin’s men to brutally kill innocent people without doing anything?” And he also said, “If the God of the Catholic Church is real why couldn’t He come and deal with Amin’s soldiers who were killing innocent citizens?” He drank heavily during those arguments. In his group, there was a young lady named Susan whose mother was a born again. She spoke to him and said, “My mother is born again. I am not yet born again but I believe God is real because my mother prays for people and they get healed.”

They agreed to go to church for an overnight prayer session but Balabyekubo said he would carry a bottle of whisky with him. Susan did not object but when they arrived at the church, Balabyekubo did not feel it was right to enter church with a bottle of whisky so he decided to hide it in the banana plantation that was next to the church. He covered it with dry banana leaves hoping that after the service he would come and pick it up on his way home. When he entered into the church he testified that as the praise and worship team sang, it really touched his heart. When Pastor Frank came to preach, his message was about trusting in the Lord other than trusting in the things of this world. He further said, “Your mother, your father, your family, your friends can forsake you, money can come and go, regimes come and go and even the regime of Idi Amin one day but the word of God will remain forever. It is dangerous to die without knowing Jesus.” So when the pastor called people to the altar to receive Jesus, Balabyekubo testified that he did not remember how he found himself in the front line raising his hands high, confessing Jesus as Lord and Savior and he did not recall where he had put the paper containing the ten questions he had come to ask Rev. Frank Lutaya.

In 1982, after his father learned that he crossed over to Jesus and abandoned his former religion, he chased him away. He further threw him out of the family and the clan because he had brought an abomination to his house and the clan. He said that Balabyekubo could no longer belong to the family and that he had a new family now—the Balokole (meaning “born again”). So he lost his job at his father’s shop, and consequently was chased out of the house his father had given him as an inheritance. He went and rented a small muddy one-room house from an old woman at Kavule, just behind Kibuye police station.

He said that after realizing that his family and friends had rejected him because of Jesus, he gave himself to heavy fasting and prayer. This caused him to lose so much weight that people thought he was sick and would soon die.

Some people came and told Bishop Grivas that his brother would die soon, so he took him some milk and some other food stuffs. He told him to renounce Jesus and the Balokole so that he could be accepted back home and bring his suffering to an end. But Balabyekubo told him that he would never do that and that, though his outer body seemed to be perishing, his inner man was being rejuvenated day by day and even told him how God had visited him through his angel in a dream. He said that in the dream the Angel of the Lord instructed him to continue praying and fasting because he had an assignment for him. He said the Angel of the Lord unrolled a scroll in front of him and that it had Arabic words written on it. He asked “Do you know this language?” He answered no. Then in the same vision the angel showed him millions of Muslims and told him to go and tell them to repent and get saved because they were misled. Balabyekubo answered and told the angel that he did not know how to speak Arabic. Then the angel told him “I have today turn loose your tongue. You shall speak Arabic. Do not fear for I, your God, will be with you.”

In 1987, Balabyekubo went to Canada for biblical studies and to preach the gospel. He was ordained as an apostle in 1991 by Apostle Peterson Sonstar in Toronto, Ontario, Canada. He took his family so they could stay together while he went for further studies. They stayed there for five years. While he was on his mission trip to the U.S., starting prayer revivals in over 38 churches, the Angel of the Lord visited him in a dream. He showed him a map of Uganda and said to him, “Do you see that woman in Uganda in agony with intense pain?” Then the angel told him to look through the woman and see how all her body parts were rotting. He told him that this was what Uganda looked like, that Uganda was in great turmoil, invaded by a killer disease known as AIDS. The angel said, “But if you only believe and go back to Uganda and teach my people how to pray and fast and believe in Me as the author and finisher of your faith, the beginning and the end, the source of life with me, nothing is impossible. I will pardon Uganda and heal the people.”

After 160 days of fasting and prayer, the Holy Spirit led him to the city and placed posters, placards and handbills saying that the cure for AIDS was in the blood of Jesus. It was a Sunday morning and the whole city was filled with the same message. It became a new slogan that had invaded the city with the message of hope in the blood of Jesus.

Balabyekubo was again led to the city to lead a crusade at the Clock Tower grounds where he invited people with every sort of disease to come and receive healing. Hundreds and hundreds thronged the crusade grounds with different ailments from all over the town and there was a big crowd in the city which they had never witnessed before. In those meetings, after preaching the salvation message, people repented and received Christ as their Lord and Savior. Then he would then invite those with medically documented HIV-AIDS to come be prayed for. He could not accept to pray for someone without medical documents as proof.

It was after one of his crusades, in 1995, that his fame spread all over the world and that the Evangelist Ernest Agley from Canada sought to form a partnership with him for a crusade in Jinja. The team was sent and the preparations were going on well: banners, posters, handbills were already hung up or distributed. He then set off with a team of five to go and supervise the work on the platform at Kinkindu stadium. Along the way at the place called Mbalala between Kawolo and Mukono, their van slammed into an oncoming lorry and he died instantly with three others. It is said that his driver had fallen asleep while he was driving.