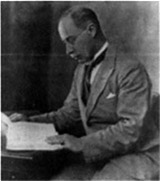 Albert Ruskin Cook was a Church Missionary Society (CMS) doctor in Uganda. He was born in Hampstead, London, son of a doctor. His father died when he was twelve. His mother, Harriet Cook, was the daughter of Edward Bickersteth. Cook was a scholar at St. Paul’s School, London, and studied medicine in London and Cambridge, being awarded the M.D. (Cambridge) in 1901. In 1895 he volunteered to the CMS and arrived in Uganda in 1897. His first task was to persuade his colleagues that a hospital was viable and would be profitable work for medically trained personnel. Not until the arrival of his brother, John Cook, to become a second doctor (1899) could Mengo Hospital, Kampala, really develop. The following year, Albert Cook married Kate Timpson, a well-qualified nurse. The hospital was accepted and grew. Cook was not only a gifted doctor but he also had linguistic gifts and participated in evangelistic outreach. However, the personality clashes between Kate Cook and the other medical personnel marred the work of the hospital while she continued as matron. Finally compelled to resign in 1919, she established the Lady Coryndon Maternity Training School (opened 1921), also in the Kampala area. Both Albert and Kate Cook were decorated for their work, and in 1932 Albert Cook was knighted. The Cooks retired in 1934, remaining in Uganda, where Kate Cook died in 1938. Albert Cook lived to see the golden jubilee of the hospital he had founded.