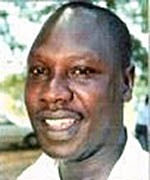 It is our vocation to save life. It involves risk, but when we serve with love, that is when the risk does not matter so much. When we believe our mission is to save lives, we have got to do our work. –Dr. Matthew Lukwiya

Dr. Matthew Lukwiya could have held a comfortable medical position in England, the Middle East, South Africa, or wherever talented African doctors go, but he stayed in Uganda instead and died a horrible death from the Ebola disease?[1]

Dr. Lukwiya, forty-two, was the medical superintendent of a large Roman Catholic missionary hospital in Gula, a small town near the Sudanese border in northern Uganda. He had grown up poor in the region, his father a fishmonger, his mother a market trader, but a succession of scholarships sent him to school and medical school, where he continuously emerged first in his class. “Dr. Matthew,” as he was known to patients and staff, began his professional life as a staff physician at St. Mary’s Hospital in Gula, a state-of-the-art modern hospital run by an Italian Roman Catholic missionary order. St. Mary’s treated eighteen thousand patients a year and five hundred out-patients a day, including army and rebel soldiers in the troubled border region.

The physician was in Kampala, 250 miles away, when news of a strange disease spreading through the north and affecting hospital personnel resulted in his being recalled quickly to St. Mary’s. Dr. Lukwiya was enjoying an interlude of study and family life after seventeen years of fourteen-hour workdays. However, he left his wife, Margaret, and their five children behind in the country’s major city and headed back to his hospital. Margaret was an evangelical Protestant, and Matthew attended services with her twice a week in Kampala and became an active Christian himself.

Ebola, first identified in 1995 in the Congo, is transmitted through contact with infected body fluids, such as vomit, blood, or sweat. It had no known cause and no known cure. As might be expected, hospital personnel panicked. The nearly four hundred employees of St. Mary’s hospital were in revolt, and Dr. Lukwiya spent a day with them, inspiring some, cajoling others. He also took important steps to curtail the spreading epidemic, alerting authorities in Kampala to it, isolating victims in a special ward, and tightening safety precautions for medical personnel, whose bodies must be completely covered in protective gear before encountering patients. Dr. Lukwiya was one of the people who tried to make patients comfortable, but in doing so committed a fatal error, leaving his face uncovered. The mistake was not uncommon. Protective masks soon fogged up, making it difficult for doctors, who also wore gloves, to puncture veins and conduct other medical procedures.

Soon Dr. Lukwiya was a patient himself. At first he thought it was malaria or another fever-causing disease, but gradually the truth was known - he had contracted Ebola, the 156th recorded victim of the outbreak. His wife came north but could not touch her dying husband. The best she could do was sit at a distance, clad in protective gear, and hold his foot with a surgical glove. He died on December 5, 2000.

Reflecting on his life, the physician’s widow remarked, “Matthew was not for worldly desires. He was just devoted to his patients. It was never business. It was just his patients. That was it.” One Good Friday, when rebels from a bandit group called the Lord’s Resistance Army came to kidnap an Italian nun for ransom, the African doctor persuaded them to take him instead, which they did for a week.

There never had been a question about what Dr. Lukwiya would do with his life. The brilliant physician wanted to stay in his native region and be a healer of people. He told his fellow medical professionals who were thinking of quitting, “It is our vocation to save life. It involves risk, but when we serve with love, that is when the risk does not matter so much. When we believe our mission is to save lives, we have got to do our work.” In a weakened state just before his death, he said, “Oh God, I think I will die in my service. If I die, let me be the last,” after which he sang “Onward, Christian Soldiers.”

O Christ, healer of nations and peoples, we thank you for the medical professionals of Africa, surgeons and nurses, pharmacists and health educators, herbalists and midwives, especially those who combat the spread of AIDS, Ebola, and other infectious diseases. Bless especially the memory of those, like Matthew Lukwiya, who laid down their lives for their people, as you did. Amen.