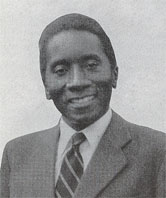 Ugandan evangelist and leader in the Balokole revival movement.

The son of a prominent Anglican landowner of Buganda (now Uganda), Nagenda was educated at King’s College, Budo. He was related to Simeoni Nsibambi, who with Joe Church of the Church Missionary Society Ruanda mission initiated the East African revival of the 1930s. Nagenda’s own conversion led him to seek ordination, encouraged by Bishop Cyril E.Stuart, who was keen to improve the spiritual and educational quality of a largely peasant clergy. Nagenda’s self assurance and assertion of radical equality between white and black, along with his outspoken criticisms of the “liberal” theology of his missionary teachers, precipitated a crisis at Mukono Theological College. In 1941 he and twenty-eight others were expelled, and he chose to remain a lay evangelist. His commitment to his church, despite its hostility, helped to prevent schism. His uncompromising message of salvation in the blood of Jesus and strict moral discipline profoundly affected Protestant churches throughout East Africa. Nagenda enabled the revival to express itself in vibrant African ways of thinking and living. He was a charismatic leader, intense and single-minded.

J. F. Church, Quest for the Highest (1981) is a detailed and illuminating account of the revival and of Church’s friendship with Nagenda. For a more distanced assessment, see K. Ward, “Obedient Rebels - The Relationship Between the Early Balokole and the Church of Uganda: The Mukono Crisis of 1941, JRA 19,no. 3 (1989): 194-227.