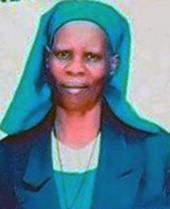 Sister Rose Mystica Muyinza is the founder of the Daughters of Charity, a charitable organization in Uganda. Through her organization, Sister Muyinza has performed special duties and responsibilities within the Catholic Church in Uganda, being committed to charity work, caring for and empowering many vulnerable persons.

Born in 1938 at Seeta in Mukono, central Uganda, she was named Imelda Namulwana by her devout Anglican parents Jose Nsubuga and Scholarstica Namuddu. She converted to the Catholic faith as a pupil at Namagunga primary school, a prominent Catholic founded institution. As a child she had always desired to become a Roman Catholic nun. For most of her childhood she lived with her aunt Edith Nakatumba and her grandparents Mr. and Mrs. Kyewungudde.

At age seven while in primary four, Namulwana went to live in a Roman Catholic religious congregation called the Little Sisters of Saint Francis in Nkokonjeru Mukono at the inspiration of her nun teachers. Life at the convent was pleasant for her. [1] She changed her name to Rose Mystica Muyinza when she joined the congregation. Imelda Namulwana attended Namilyango Junior School, and St. Joseph’s Namagunga.

After nine years in the convent, she had to leave in order to look after the fifteen children of her late brother Mr. Mabira. She formally resigned from religious life, but continued to live the rule of life for the religious.

She earned a diploma in social work and social administration from Nsamizi Institute and a bachelor of arts degree in education from Makerere University. She is good at mathematics, music, dance, and drama. [2]

She founded the Daughters of Charity Community after graduating from Makerere University and working for the Bank of Uganda for a short period. Sister Muyinza then dedicated her life to serving vulnerable children and needy women, mostly those affected by war and HIV/AIDS.

She has set up orphanage homes in central Uganda in Nsambya, Kampala, Kiwanga, Mukono, and Rakai. She is devoted to work and she has no property of her own. [3] Her life is governed by Christian principles. She is actively involved in the Catholic Church activities especially in the field of music, dance and drama. [4] She has instilled the culture of prayer in her Daughters of Charity Community. She serves God’s people within the Catholic Church and outside it. She was head of the laity in Nsambya Catholic Parish Kampala Archdiocese. She has been a member of the National Council of Children in Uganda, and a board member of the Uganda Bible Society. She was advisor to Uganda’s First Lady Mrs. Janet Museveni in setting up the Uganda Women’s Effort to Save Orphans (UWESO). She won the Guinness Power of Goodness Award as one of the fifteen most outstanding Catholic women in Kampala Archdiocese in year 2000.

Muyinza’s work is comparable to that of Mother Theresa of Calcutta India only that Muyinza empowers people to be self supporting. She strongly believes in the integration of the Catholic faith and the indigenous African traditional culture in Uganda. [6] She also promotes the integration of African traditional cultural medicine and modern medical practices in Uganda. She always advocates for the culture of charity. She encourages the vulnerable to cooperate and unite. She also encourages her former congregation, the Little Sisters of St. Francis, in their work of expanding the kingdom of God and in upholding the values of unity.

Owekitibwa Teo Lubega: Owekitibwa Lubega is the Coordinator of Daughters of Charity who helped Sister Muyinza to run the charity organization.

Florence Ndawula Nalongo: Nalongo Ndawula is the home administrator of the Daughters of Charity who is a close associate of Sister Muyinza.

Benedict Kiriisa: Kiriisa a social welfare officer with the Daughters of Charity, a close associate of Sister Muyinza.

Ivan Kilya: Kilya worked with Sister Muyinza as a social worker for the Daughters of Charity.

Sister Felicitas Nakamya: Sister Nakamya, who is seventy years old, is the current mother superior of the Little Sisters of Saint Francis at Nkokonjeru. Sister Nakamya is a close associate of Sister Muyinza.