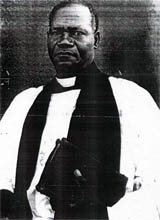 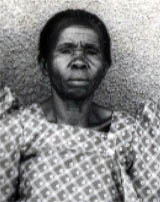 Erizefani Waalwo, the last born child of his parents, Ndubyalire and Nakigembe, was born on November 15, 1915. By dialect, Erizefani Waalwo was a Muluuri. He was born in Lango at a place called Birala Akokoro, which is also where Milton Obote, the second president of Uganda, was born.

Waalwo became a very strong and tall black man. He was aggressive, hot-tempered, and ambitious. Some people testified that before Waalwo was saved, he could easily be drawn into a fight. He had no fear of wild animals, and it was said that he killed a leopard during his teens.

From childhood on, Waalwo was a witness to the silent battles that took place between the Baganda, Banyoro, Basoga, Bakedi, and Balango. He saw how various tribes used witchcraft for family protection and for waging war against their neighbors, especially the Baganda. He came to understand how witchcraft kept people in total poverty and ignorance, making them antagonistic and superstitious.

Waalwo almost became a fisherman because, like all the other young boys of his age around the shores of Lake Kyoga, he knew how to fish. By 1920, his father, Ndubyalire, and his grandfather, Butagambe, had moved from Akokoro to Kalula-Mulonzi, south-west of Lake Kyoga. Butagambe had fishing boats, and the young Waalwo stayed in his home and learned how to fish until his parents moved to Lwabiyata-Nalulongo, near Kisaalizi.

In Kisaalizi, Waalwo came under the influence of Musa Kiwanuka, who was a school teacher there. Musa Kiwanuka befriended and adopted the strong young boy, so he started going to school. He was baptized by Yeremia Muddukaki, the assistant vicar to Rev. Thomas Senfuma, and he was confirmed by Bishop Willis.

By 1906, Kisaalizi had grown into a trading center because missionaries from the Namirembe Diocesan headquarters had established a church with a school there. Naturally, the church and the school attracted trade activity to the area, which is why Ndubyalire brought his family to Lwabiyata. Since Kisaalizi was very near the lake, there were a lot of mosquitoes there. It was because of the mosquitoes that the white missionaries moved from Kisaalizi to Baale-Ndejje.

Musa Kiwanuka helped Waalwo to enter Ndejje junior school and later, Namutamba Primary Teachers’ College. After becoming a professional teacher, Waalwo was sent to Kisaalizi primary school to replace Musa Kiwanuka, who had gone to Mukono Bishop Tucker College to train as a deacon. Waalwo did not stay at Kisaalizi for a long time, however, as his teacher Musa Kiwanuka had. He was transferred to Nakitoma primary school, and then to Nabiswera primary school.

After the white missionaries moved to Ndejje, Kisaalizi slowly lost the chance of becoming a parish, and school enrollment dropped to very low levels. In 1913, this forced Rev. Thomas Senfuma, the parish priest of Luweero, to transfer the sub-parish status of the church of Kisaalizi to the church at Nakasongola. Things got worse in Kisaalizi, and it seemed like it had been abandoned. Even by 2011, Kisaalizi had still not recovered the status it had lost, and it failed to become a parish church. Thus, it was in the parish of Nakasongola for a very long time.

Waalwo had two children out of wedlock with his first wife. They were named George Wilson Lukwago, and Betulensi Nantongo (deceased). In 1944 he married Getulida Nakibuuka Tubwita in St. Andrews church, Nakasongola. He was later transferred to Nakasongola Primary School, where he worked both as a teacher in the school and as a church catechist. In 1954, Waalwo entered Mukono Bishop Tucker Theological College. Two years later, he was ordained by Bishop Stuart in St. Paul’s Cathedral, Namirembe. In 1957, he was posted to Kinunka-Kabula, in Tanzania, where he served as a missionary for four years, both in the school and in the church. Because of his hard work, he soon became a head teacher in the Kinunka primary school.

Waalwo and Getulida were saved in 1958 while serving at Kinunka. Kinunka had become a great center for the revival movement in Tanzania, and was comparable to Gahini in Rwanda, and Kawempe in Uganda. The revival movement of East Africa changed Waalwo significantly, and he went from being an aggressive, hot-tempered man, to being a meek and peaceful gentleman. Whenever his hot temper came back, Getulida (Gertrude) helped her husband to cool down. Getulida was a short, peaceful, black lady. She loved all people unconditionally, and welcomed into her home both the saved and those who had rejected Jesus Christ.

Getulida and Erizefani had seven children: six boys and one girl. These children grew up in a home full of people and full of the revival spirit. Their first son, John Elly Sentongo, became a treasurer at Bishop Tucker College before Kabaka Ronald Muwenda Mutebi appointed him as a delegate to the Lukiiko of Buganda in 2009. Ellis Kafeero died. Joshua Abimanyi Mugerwa became a doctor and went to serve in Canada. George Muwanguzi Sentongo and Paul Kirabo Katumba both became businessmen. Ruth Namuli Zziwa became a housewife, and Emmanuel Tumwebaze Ssali worked at the American Embassy in Uganda.

Getulida and Erizefani adopted many other children. Their home, on average, used to have twenty to thirty people in it. When Waalwo was transferred to Nakasongola in 1960, their home became bigger, and was almost comparable to Luwandaga’s home. Andereya Luwandaga Kimbuggwe was the Ssaza chief of Kabaka in Nakasongola in 1920’s. It was Luwandaga who gave 125 acres of land to the church at Nakasongola.

The twenty years Waalwo served in Buluuri-Nakasongola brought out all his many talents. Waalwo proved to be an excellent soul-winner for Christ, a political strategist, a man of prayer, a hardworking head teacher, a successful farmer, a wonderful carpenter, a very courageous man, and a primary healthcare worker. People of all social levels, both in and outside of Nakasongola, respected him very much.

When Waalwo was in his early teens, working as a fisherman on the shores of Lake Kyoga, he acquired a very rich background in witchcraft. Fishermen were always enlisting the powers of the ancestral spirits for safety against the multitude of evil spirits that were around the shores of Lake Kyoga. That background only increased his enthusiasm for becoming a spiritual warrior for Christ, and he excelled in driving out demons. Diviners from the various tribes around the lake joined forces against Waalwo and attempted to burn his thatched homestead, but that made him even more courageous. His powerful prayers in the name of Jesus Christ defeated them all. He challenged the ancestral spirits of the Baganda, Basoga, Bakedi, Bateeso, Banyoro, Bagishu, Banyara, and Langis. He demonstrated how powerful the word and the name of Jesus Christ is before sorcerers, diviners, and witchdoctors.

People in the whole Buluuri-Nakasongora region saw him as a man who feared nothing. Several times he traveled long distances on foot or on a bicycle through a jungle full of lions, buffalos, hyenas, wild pigs, and leopards, but those fierce animals did not dare touch him. On several occasions Waalwo testified about this, telling people how he escaped from being torn to pieces by angry lions. His fame spread like wildfire.

Little by little, Waalwo’s home became a place that helped to shape the Kiluuri dialect. Kiluuri culture is a mixture of several languages that are spoken around Lake Kyoga. The spirit of nursing the Kiluuri culture began to grow and to spread, and in that vein, Waalwo found it easy to start several sub-parishes in Nakasongola. Sub-parishes he founded include Kakooge, Nabiswera, Lwampanga, and Kisenyi. He worked tirelessly to turn those sub-parishes into parishes, and he saw almost all of them become full parishes before he retired in 1980.

Waalwo was a great soul winner. He organized several missions that brought some people to accept Jesus Christ as their personal Lord and Savior. He gave a lot of time to pastoral visits, and he made sure that all the people who were saved were nurtured to maturity. His home became a center for revival meetings, and people came to Nakasongola from as far as Kinunka,Tanzania, Kenya, and Rwanda.

Waalwo and Getulida’s home became a place where many people became disciples for Christ. These disciples include: the Rev. Canon John Ssenyonyi, Vice Chancellor of Mukono Christian University in 2010; the Honorable Peter Nyombi, a minister in the government of Uganda; Bishop Samuel Sekkadde; Rev. James Balongo; Rev. Samuel Kyakulagira; Rev. Canon Tibwomwe, and Venerable Canon Geoge Byansi. These disciples spoke of Waalwo’s home as a spiritual center in Nakasongola which never lacked for fish, honey, milk, meat, eggs, simsim and millet, and chickens and groundnuts were always plentiful. Waalwo was a hardworking and successful farmer, and his disciples and children emulated a number of his qualities.

Waalwo used his position as a priest and a head teacher to compel his people to fight against jiggers. He placed great emphasis on the need to construct pit latrines, bathrooms, and kitchens. He also encouraged people to make plate stands and to immunize their children against polio, measles, tuberculosis, and smallpox. As such, he was indeed a primary healthcare worker in the whole area of Nakasongola.

Unlike several other priests in those days, he consented to the baptism of children who were born out of wedlock, children who were commonly regarded as bastards. He never deserted his ministry, and he knew that the people of Nakasongola needed someone with an understanding of the Baluuri culture to bring them into the fold of Christ. His excellent work was recognized by Bishop Dunstan Nsubuga, who made him a canon in 1979.

Even after he retired in 1980, Waalwo remained “a man of reference” in many ways. He gave significant help to Rev. Canon Joseph Ssegujja Sekasi when Nakasongola parish became an archdeaconry in 1987. He continued to be involved in church and civilian life in various ways. His knowledge of carpentry helped him to advise Nakasongola primary school, the church there, and the Ssaza headquarters on how to acquire well made furniture. His skill in arithmetic, coupled with his integrity, enabled him to serve as a treasurer whenever his services were in demand.

Waalwo began to weaken physically after the death of his wife, Getulida, in January of 1994. Getulida’s absence was keenly felt in their large home, as she had been a key partner in managing the farm and the revival meetings. Waalwo treasured his wife very much. He became ill both psychologically and physically, and he died on November 12, 2002. His body was laid to rest close to his wife’s in the back churchyard of St. Andrews church in Nakasongola.

This article, received in 2012, was researched and written by Rev. Canon James Selugo of Ndejje University, Uganda, where he is DACB liaison coordinator.