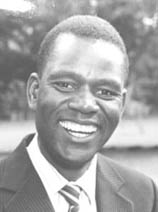 Rev. John Zulu found the Lord at the age of twenty-two and joined the Church of the Nazarene. In accordance with the teaching of the Nazarene Church, he was entirely sanctified three years later through the influence of his missionary pastor.

Zulu felt called by God to serve as pastor and in 1973 enrolled in the Nazarene Bible College at Limbe, Malawi. He graduated in 1976 and was ordained in 1978. The first church he served was the Chilenje Church on Zambia South District. He and his wife Rosemary had six children.[1]

Zulu served the Chilenje Church in Zambia with great love and dedication. The Madalitso (Blessing) choir from the church in Lusaka was planning to attend the Second African Regional Conference at Harare, Zimbabwe, in September 1987. For many of them, the trip would cost two months’ salary, but they were willing to do whatever was necessary to raise the needed money. They raised 3,000 Kwacha (the Zambian Kwacha being the currency of Zambia) but only a few weeks before the Conference they still needed to raise over K9,000. They brought charcoal from a forest area seventy kilometers from Lusaka and spent long days bagging, loading and transporting over 1,000 bags to town to sell. They also loaded six tons of river sand by hand onto a lorry and broke large stones into small pieces for concrete. When the deadline came, twenty-four choir members had raised enough money to attend. The choir celebrated with a special day of prayer, fasting and practice as they prepared to minister through their music at the conference. Their outstanding music and spirit were a great blessing to all who heard them at the Regional Conference.[2] Since that time the Madalitso choir has been singing at the Quadrennial General Assemblies of the Church of the Nazarene in the USA including the one held at Indianapolis, Indiana, in June 2001 and again in June 2005.

Besides the Chilenje church, Zulu also opened and pastored the Matero, Woodlands and Kaunda Square churches during the ten years following his graduation from Bible College. He was elected as the district superintendent of the Zambia South district in 1986 and served for eleven years. In 1987, his prayer was that “the Lord will raise up men and women in the church to help reach the unreached for Christ.”

In 1989, he contacted over 430 Chewa speaking Nazarenes among the refugees from Mozambique at the Ukwimi Settlement in eastern Zambia. Zulu organized them into a church and began visiting each month.[3] He founded the English speaking church in Chilenje. Under his leadership, the district expanded very rapidly. He sent Rev. Sakala to open a church at Kafue and Rev. Daka opened new churches at Bauleni and Chipata.[4]

In 1996, Zulu and his wife began pioneering an English speaking church in Lusaka. In May 2003, he was appointed the Superintendent of the Zambia North District and continued serving in this capacity until his death.

He was one of the pioneers of the Church of the Nazarene and an influential leader in Zambia and was known for his cry that “Young men and women should respond to the call and take the Church aggressively forward with evangelism and teaching.”

John Zulu passed away suddenly and unexpectedly on June 8, 2005 after suffering a stroke. This was just shortly before he was planning to leave to be a delegate to the General Assembly in Indianapolis, Indiana. He collapsed while at the U. S. Consulate applying for a visa. Rosemary continued with the tour as a member of the choir.[5]