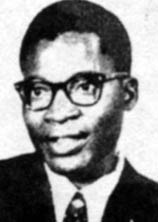 Rev. Ignatius Daka Chavanduka was born at Ngezi Mhondoro, Gatooma District, in Eastern Zimbabwe. His father had been installed as chief of the area the previous year. Some were not happy about his appointment, hence his son’s name, Daka (Jealousy).

Ignatius was educated at a Roman Catholic school and faithfully attended services but was never converted. The family continued to believe that the ancestors held power of life and death and had to be appeased. He found employment in Salisbury (Harare) and met non-Christian friends. They despised God and Jesus Christ. Chavanduka thought Christ died because He was a sinner himself.

In May 1962 he found the Lord, who brought peace to his heart, through an evangelism campaign of the Dorothea Mission. The following year he met the Church of the Nazarene and joined at Harare where Enoch Litswele was the pastor.

Chavanduka was entirely sanctified in 1964 through the ministry of the visiting General Superintendent, Hugh C. Benner. Called to preach he completed study at Malawi Bible College in 1966 and married Mrs. Ruth Chavanduka the following year. They pastored the Kambazuma Church, Harare.

In 1970 Chavanduka became the pastor of the Highfields Church. The following year he was elected the first District Superintendent of the Zimbabwe District, in which capacity he served until 1981. He was ordained in 1969 by General Superintendent V. H. Lewis.

In 1982 they went to Zambia and pastored an English-speaking church in Lusaka. From 1 May 1983 the Woodlands Church became self supporting. This was a big step of faith as it was only one year old. Returning to Zimbabwe in 1984 Chavanduka started the Harare South Suburbs Church and then went into full-time evangelism in 1990.

It was said of him, “He was a vital young man and looked after the churches with the care of a mother hen.” Chavanduka was the first Zimbabwean minister to die in active service. He died suddenly from heart failure and was survived by his wife and six children.[1]