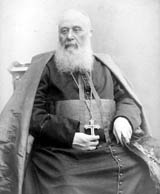 Charles Martial Allemande Lavigerie was a French cardinal and founder of the White Fathers and White Sisters. Lavigerie, son of a middle-class family in Gascony, studied at the Paris seminary of St. Sulpice and was ordained in 1849. After an academic, he was made director in 1860 of the Oeuvre des Écoles d’Orient, an organization aimed at helping the Maronites of Lebanon. Henceforth, both Christian-Muslim relations and the needs of Eastern Christian communities were important to him.

Lavigerie was bishop of Nancy from 1863 to 1867. Soon one of the best-known French bishops and a candidate for the primatial see of Lyons, he accepted instead the recently established archbishopric of Algiers at the request of its governor general, Marshal MacMahon. In the government’s eyes its ministry was only to French settlers. Lavigerie, however, viewed it as a base for missionary activity, and conflict with MacMahon soon developed. In 1884 he was also appointed archbishop of the revived see of Carthage and in 1882 was named a cardinal.

In 1868 he had founded a missionary society, Missionaries of Our Lady of Africa, soon universally known as White Fathers because of their Arab-style white robes. The White Sisters followed a year later. While the original purpose of these societies was evangelization of North African Muslims, a secondary purpose soon became the real heart of their work-a mission to the central African interior, east and west. Particularly important was the mission to Buganda of 1878. Lavigerie’s Instructions aux missionnaires is valuable for its emphasis on language learning and also on a lengthy catechumenate before baptism. His increasing concentration upon central Africa led to his 1888 campaign against the slave trade in which he addressed mass meetings in several European capitals including London.

Lavigerie was a man of tremendous energy and large ideas. His founding in 1882 in Jerusalem of a college for the training of eastern-rite priests and his insistence that they must not be “latinized” expresses perhaps better than anything else the key to his missionary approach-a deep respect for cultural pluralism. His autocratic, ambitious, and hot-tempered nature damaged his work at times and undermined relationships even with those most devoted to him, but he remains unquestionably the most influential single figure in the nineteenth-century missionary revival of the Catholic Church.

Lavigerie’s Instructions aux missionnaires (1950) is a collection of his main letters of guidance to the White Fathers.

J. Dean O’Donnell, Lavigerie in Tunisia: The Interplay of Imperialist and Missionary (1979).