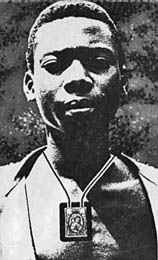 Isidore Bakanja, who gave his life for the Christian faith, led a simple life as a Catholic layman at the time of the atrocities perpetrated by King Leopold II’s regime in the Congo Free State. He was born at Bokendela on the river Congo, north of the town of Mbandaka (formerly Coquihatville). His father and mother were called Iyonzwa and Inyuka. Bakanja’s own name was variously pronounced as Bakanda, Bakana, Bokando, Makanda and Makando. In his early twenties Bakanja went down river to Mbandaka seeking employment. There he became a mason and was employed by the government in the building industry. While in Mbandaka he came across Catholic missionaries of the Trappist (Cistercian) Order, was instructed by them and was baptized at St. Eugene’s parish, Bolokwa-Nsimba, on May 6th, 1906. He received First Communion and Confirmation later in the same year. Bakanja lived his new faith very simply, cherishing the two external signs of the rosary and the scapular which he never failed to wear. By word and example, he attracted friends and acquaintances to the Christian faith.

Bakanja then conceived the idea of returning to his village area in order to work on a European owned plantation. In spite of warnings from his friends, he found work as a servant in the house of a plantation supervisor called Reynders at Busira. When Reynders was transferred to Ikili, Bakanja accompanied him. There, the plantation manager was a certain Van Cauter, who was known to be fanatically opposed to Christianity and to Christian missionaries. Bakanja carried out his duties conscientiously and his relations with Reynders were cordial, although the latter warned him in vain to conceal his Christian faith. Van Cauter, however, was furious when Bakanja refused to remove his scapular, and ordered him to be severely flogged. Bakanja accepted the unjust punishment in the spirit of Jesus in his passion. Later, Van Cauter saw Bakanja praying during a rest period and flew into a rage. He had his headman flog Bakanja again on the spot. Bakanja was given more than 250 strokes with a hippopotamus hide whip that had nails in it. He was then locked up and chained. At length, he was released and ordered to accompany Reynders to Isoko. Scarcely able to walk, Bakanja hid in the forest. After three days he was discovered by another official called Dorpinghaus who came to inspect the plantation. Bakanja was carried to a river boat and received treatment for his sores, which by this time were beginning to putrify. His exposed bones also caused him acute suffering.

At Ngomb’Isongo, where the river boat put in, it proved impossible to stop the infection. Dying of septicaemia, Bakanja was taken to Busira to be cared for by the local catechist and received the visit of two Trappist missionaries on 24th and 25th July 1909, from whom he received the last sacraments. He died on 15th August, forgiving and praying for his persecutor. Van Cauter was subsequently taken to court by his employers and was given a prison sentence. On 25th April 1994 Isidore Bakanja was beatified by Pope John Paul II in the presence of hundreds of African bishops, priests and religious, attending the Special Assembly for Africa of the Synod of Bishops in Rome.