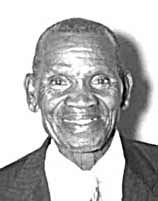 Mkhwanazi was a bold and courageous man, known to have wrestled with and overcome pythons [1], a very positive person who loved to fight, often taking on four or five at a time. He was a champion and was never defeated. A man among men Rev. Josefa Mncina Mkhwanazi (1886-1965) was five feet, nine inches, tall weighing 170 pounds and was incredibly fast. He had a roughly chiselled face with a forehead overhanging his piercing eyes that kept him from being blinded by the sun.

His father was afraid he would someday kill someone. In order to curb his violent temper Mkhwanazi placed charms on his arms, wrists and ankles but his fighting only became worse and he remained a drunkard. His elder brother persuaded him to join the police at Pigg’s Peak. After three months he became annoyed one day and fought a fellow policeman in front of the magistrate’s office. He was severely reprimanded and given a final warning. He longed for deliverance from that evil spirit that dominated him.

Then in 1911 while on detective duty in the southern part of eswatini, he passed a building where he was attracted by the singing. He entered, sat down and listened. The following week he found the Lord through the ministry of Miss Malla [2] Moe a missionary of the Scandinavian Alliance Mission. He became entirely sanctified and found the remedy for his violent temper and all the other evil problems in his life. His energy became focused on the furtherance of the gospel.[3]

Mkhwanazi reached a high position of authority in the police force. However, when his five year police contract ended in 1915, he joined the mission at Endzingeni. For eighteen months he entered the preachers’ training classes that had just begun. He married Emma, an outstanding Christian girl. Starting to pastor at Evusweni under a tree, they soon built a strong congregation. His bugle began to be heard all across the hills and valleys. When their young and only daughter Sarah died, their sweet resignation to God’s will was a great lesson to Swazi friends.

A problem arose when his elder brother died. This made Mkhwanazi head of his father’s homestead and obliged him to take his brother’s three non-Christian wives. Two of them returned to their homes but the third one insisted that he take her. For him to refuse would be a grave insult to the ancestral spirits. The relatives invited him to an evening meal and formally presented his additional wife to him. He was grieved but gently explained why he could not comply. Relinquishing all of his rights in favor of his younger brother, he walked out into the night.[4]

He was not afraid to challenge unchristian practices and was called Nguzondokubi (“the one who hates evil”)[5]. He preached until people wanted to kill him. The local chief once told him to leave and arrived one Sunday during the service with four warriors armed with clubs, spears and sjamboks (hippo-hide whips). They informed him that they had come to whip him, and the congregation quickly fled from the building. In a flash Mkhwanazi disarmed them all and threw their weapons into a corner. He had them sit down, called the people back in and continued his message. The chief was amazed and said to his best warrior, “Did he get your weapon too?” They saw the hand of God in this and two of them came forward to pray at the close of the service.[6]

Mkhwanazi never shirked danger and twice rescued the pioneer missionary, Rev. Harmon Schmelzenbach, when his strength failed him while swimming across raging, crocodile-infested rivers.[7] Harmon Schmelzenbach travelled with him all over northern eswatini evangelizing and planting churches. He became the area overseer.

In 1927 Mkhwanazi wrote that the mother of King Sobhuza had asked the churches to pray for rain because of severe drought. They fasted and prayed. He praised the Lord because that year they had the greatest rains ever known.[8]

Mkhwanazi was instrumental in helping Elmer “Vusigama,”[9] the son of Harmon “Sibhaha” and Lula “Vulindlela”[10] Schmelzenbach, settle his call from God to be a missionary in Africa. He wrote to him repeatedly while Elmer was at Northwestern Nazarene College in the U.S.A.

Mkhwanazi was ordained by Dr. J. G. Morrison in 1939 and was appointed full-time leader of the entire district. He led many into the ministry. Dr. Samuel Hynd, son of the pioneer Nazarene medical missionaries in eswatini, Dr. David and Mrs. Agnes Hynd, came to the altar, when Mkhwanazi preached, and gave his life to the Lord.

A hard worker, Rev. Mkhwanazi often said, “Younger men eat the dust of my feet in the work of preaching the gospel.”[11] When the time came to retire in 1955 he said he did not find retirement in the Scriptures.[12] He continued to pastor at Mliba and was loved by all. Shortly before he succumbed to cancer, with tears in his eyes he pled with missionary William Esselstyn to preserve the unity between his people and the missionaries and never allow anything to break their fellowship or cause mistrust.[13]