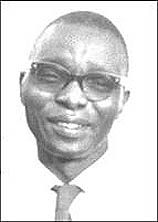 Leonard C. Sibandze was born into a typical Swazi home at Hhelehhele (Pigg’s Peak area). His father, Dumendlini, had five wives. Four were descendants of King Dlamini but Leonard’s mother, LaMlotsa, was a commoner. When he was about three he was sent to live with a grandmother who was the wife of Chief Prince Gomba of Hhelehhele. Leonard was impressed with the happy testimony and exemplary life of Matobhi Dlamini, a fifteen-year-old daughter of the chief. He heard her as she prayed mornings and evenings and longed to know more of the eternal life of which she spoke.[1]

He reported that as a boy he heard fearful rumors about Christmas, that the Christians went to Endzingeni Mission to play “Christmasbach.” If you hit a person or even killed him, you would not be arrested because it was the time for “opening of blood.” In addition to this it was often heard that at Christmas time people would kill one another with kieries (sticks) in the mine compounds.[2]

Early one morning while he was milking the cows, his father came to fetch him. Against the boy’s will his father took him back to his own homestead. His father bit him all over his body, leaving him with bleeding wounds, and threatened to kill him if he ran away. Leonard fled and hid in the hills under a rock for two days. As he was very hungry he went to an uncle’s homestead where a young girl told him that they were looking for him. She gave him some cooked mealies (maize). Back hiding in the mountain, he awoke the next morning feeling very weak, and he saw his father far away heading back to his own home.

Leonard arrived home later that morning. His grandmother was grieved and fearful. She smeared him all over with vaseline. He was feverish. Then she sent him, accompanied by the Queen Mother, to the residence of Chief Gomba Nkosi Dlamini. He was the son of Ndlaludzaka of Tsitsibala. There Leonard was warmly welcomed and told he was safe from his father. However, there were no Christians in that homestead and his heart was sore as he was continually exposed to ancestral worship. As they herded the cattle, he and the other boys would fight and wrestle to learn to be courageous. He learned traditional behavior and how to respect his elders.

Once when Leonard was about seven, Rev. Solomon Ndzimandze visited the homestead and sang a song, “I am a pilgrim staying in this world for a short time.” When he was nine his father politely requested that he return home to look after the cattle as he was going away to work in Johannesburg. His mother had already fled and there were no Christians there either. He stayed with Lakekela. Once three Christian girls were out visiting homes and testifying. They found Leonard with his hands trapped so that he could not loosen himself. They loosened him saying, “My boy! the devil has trapped you but Jesus can set you free.”

He would visit the pastor’s home and receive food and also the Word of God. One day when he was ten years old the pastor invited the boys to come to school and he wrote a few words on a piece of paper with his eyes closed. Leonard admired this and wished he could do it. One day he visited the church and was so dirty from dipping the cattle that he sat on the floor. However a boy invited him to sit beside him on a bench to share his hymn book. This kindness helped him decide to repent and attend school. One Christmas his sisters took him with them to visit their father at Tsheboya (Kaapschehoop in Mpumalanga) where his father worked on a mine.

Leonard stayed on there with Robert Dlamini, a Christian son of Chief Gomba Dlamini. At first his father refused to allow him to go to church. He said he did not want a vagabond at his home since people who wore trousers were untrustworthy. Eventually his father relented. There Leonard found the Lord as a lad of twelve. Pastor Phineas Dlamini prayed that the Lord would guide him and one day make him a preacher. He began attending school in the evenings.

Back in his mother’s home in 1930 he had to take a stand as a Christian on many matters. While in school at Hhelehhele his pastor was Solomon Ndzimandze. He attended school at Pigg’s Peak and helped move the school and Bible School to Siteki in 1933. He made the entire journey of about ninety miles on foot. While in school he matured as a Christian. In 1935 when he first started teaching at Mphondla he went barefoot as he had no shoes. Then he went on to the Swazi National High School and finally to teachers’ training at Adams College in Natal where he graduated along with Ralph Kunene in 1941.

Leonard Sibandze married Miss Patricia Matfunjwa in 1943. They taught together at Hhelehhele where Sibandze was the headmaster. While he was serving as headmaster of Endzingeni school, he sensed the call to the ministry which came during a meeting in 1951 held by Rev. James P. Malambe.

Sibandze responded in 1956 and enrolled in the Bible College at Siteki for the four year course. Giving up his well-paid profession as a teacher, he pastored at Siteki and was ordained in 1961 by Dr. G. B. Williamson. During the 1960s he would speak each week in chapel to a great crowd of high school students. He would speak calmly and deliberately, and they listened so attentively that one could almost hear a pin drop in that large church sanctuary.

His years as pastor were marked by sincerity, humility and love. He was keenly interested in helping other pastors, especially those with personal difficulties. Sibandze had a great influence on the men of the church. He taught them how Christians should respect their wives. He often spoke of the strength and ability of Patricia, giving her credit for his success in the ministry. Regardless of their position in life, he ministered equally to everyone.[3] His father found the Lord shortly before passing away and his mother was converted while the Sibandzes were in Bible College.[4] When he left the Siteki area in 1969 the chief promised him a place to build his retirement home.

Leonard Sibandze was elected the second district superintendent of the Church of the Nazarene in eswatini in 1969 and he retired in 1982. During this time twenty-two new churches were organized on the district. Full membership increased from 3000 to 5000. A new district was started in southern eswatini in 1975. He led the eswatini church in the North to full self-support and regular district status in 1980.

After retirement he moved to Amanzimtoti in Natal, South Africa, to teach in the Bible College there from 1983 until 1985 and then returned to teach again at Siteki. The chief kept his promise and gave the Sibandzes a place to build. Many pastors and lay people donated their labor to build the home. In thus providing for him, God had indeed kept the promise given to Sibandze when he was a lad of sixteen.[5]

In 1982, three years after Patricia had died, he married Rev. Ellen Lomvula Mnisi. She had been a successful pastor since 1968 when she revived the church at Mvembili. She was an ordained minister.[6]

Since 1960 Sibandze had suffered from diabetes and later had heart trouble. After his death, Ellen paid tribute to Rev. Sibandze. “We had a sweet family life together. He always showed respect and humility even amidst difficulties. His face never changed; he was faithful, loved everyone and did not speak badly of people. Everyone loved to listen to his messages. He loved to study the Bible and thought deeply; he did not like to have any enemies and often wept as he prayed.”[7]

The church at Siteki was packed at his funeral. A passing motorist thought that it was a wedding.[8]