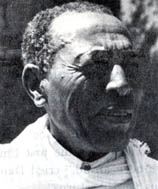 Dana Mäja was one of the Wolaitta Kale Heywet Church (WKHC) fathers and served as president of the WKHC administrative council for twenty years.

Dana Mäja resided in the Wanché Mortato area, some fifteen kilometers southeast of Soddo. His wife’s name was Biramé and together they raised a family of fourteen.

By young adulthood Dana Mäja had become relatively wealthy buying and selling slaves. Since the subjugation of Wolaitta by Menilek II in 1894, slave raiding had been a lucrative business for able-bodied risk-takers. Wolaitta families would be preyed upon at night; the fathers would often be killed so that wives, children, and young people could easily be captured. Before the slave trade was outlawed, Dana Mäja was awarded the distinguished title of Danya (judge or arbitrator) to his name Mäja by the Wolaitta governor, the Honorable Yigäzu, because he had killed a brigand with his spear. By the mid-twenties, slave raiding–by then officially outlawed by the Ethiopian government–was only carried on as a clandestine activity by a few bandits, who, in turn, sold the slaves into the Arab slave market. Consequently, Dana Mäja became concerned for his own reputation and decided to stop his illicit activities. The community perceived Dana Mäja as one who upheld truth and integrity.

By 1920 the prophetic pre-Christian teaching of Esa had made a strong impact throughout Wolaitta. Dana Mäja left the worship of his father’s ancestor spirit for a limited time to practice what Esa taught. He destroyed all cultic objects from his house that had to do with traditional religion such as his pipe, his tobacco, and various sacred objects used to make sacrifices to his ancestors. For a time he attempted to practice the teaching of Prophet Esa, but the results Dana Mäja anticipated were not forthcoming. There was no reprieve from the harshness of the Amhara oppression and he continued to fear the malevolent spirits. In addition, the personal benefits he sought never materialized. He lamented, “The cows which I was promised would come out from the earth never did, so I returned to practice the religion of my fathers.”

In 1935 while Dana Mäja and his oldest son Markina were making their way home from Soddo, the district capital of Wolaitta, they came upon a group of people listening to a small fiery preacher outside their neighbor’s home. They were invited to stay and listen. The preacher was Wändaro Däbaro. His message was, “The Lord Jesus is going to come back to this world. When he comes he will take all those who believe in him to heaven. But those who do not believe he will cast into the lake of fire. Therefore, all of you who do not believe in the Lord Jesus but worship and make sacrifices to Satan, you will be thrown into the lake of fire along with Satan. Believe today.”

In December 1936 the dreaded Italian war machines arrived in Wolaitta. To Dana Mäja, the sight and sounds of low-flying airplanes, wide-eyed gun-carrying Italians as frightening as wild horses, roaring tanks and bursting hand grenades, were sure signs of an impending judgment. Some months later, in March of 1937, in desperation, burdened with guilt and fear of impending judgment, Dana Mäja and his son, Markina, made their way to Lolamo Boké’s house at Galdabo, about a forty-five minutes’ walk from his Wanché home. On arriving, he discovered, to his disappointment, that Lolamo had gone to a church meeting. Lolamo’s wife hesitated to give him specific directions because Dana Mäja had a reputation for being a “big man” and was known to have been a slave trader. As he was returning home he met Lolamo and preacher Wändaro. The men were somewhat reluctant to invite him to the baptism, but Lolamo convinced his friends by saying, “Our Lord did not turn away from the one sheep after the ninety and nine were safe in the fence. Why should we refuse this man just because we are fearful?”

After observing the baptism of about fifteen people in a small stream, Dana Mäja and Markina were told to wait outside the house while Lolamo and the others went inside to celebrate the Lord’s Supper with the newly baptized believers. Impressively dressed as befitting a “big man” in a coat and jodhpurs with a wide cloth wrapped around his waist, Dana Mäja became very angry at having to wait outside in the hot sun because he considered himself a respectable man in his community. As a visitor to this community he expected to be treated with the respect due his rank. When sweat began to pour down his face because of the hot sun, he decided to mount his mule and make his way over to his sister’s house nearby. However, when he tried to get up, somehow his legs would not obey him and he remained glued to the ground. Finally Lolamo came out and asked Dana Mäja if he really wanted to believe in Jesus. After being ushered into the house, Wändaro asked father and son to raise their hands and repeat after him:

I have denied Satan.

I have accepted Jesus.

I believe that Jesus died for my sins.

I will not worship Satan again.

Wändaro then advised them to throw out all cultic objects from their house. After returning home, Dana Mäja and his son gathered up the tobacco water pipe, the tobacco, the slain bandit’s clothes, and some old keepsakes passed down from one generation to another–objects that were supposed to give spiritual power to the household. All this paraphernalia and other objects used in traditional religion were thrown over a cliff.

Unusual changes came about in Dana Mäja’s personal and family life. Before they ate their first meal at home, father and son bowed their heads and gave thanks for the food according to the instructions they had received from Wändaro. After ending their ritual with a loud “Amen,” they noticed that the mother, Biramé, and the smaller children were laughing at them. Biramé asked them, “Why are you doing such strange things now?”

Nevertheless, family members began to see such a change in Dana Mäja’s behavior that they knew something significant had happened to him. Whereas previously he got very angry and said harsh things, now he was kind. Soon his wife, Biramé, became a believer. The family began to enjoy singing together after their evening meal for joy marked their conversion. This is one of the new songs they sang as a family:

Our Lord descended from heaven;

He was born of Mary;

To save us he died on the cross for our sins;

Defeating death, he rose from the dead;

He ascended to heaven;

He will come again

And take us to Him.

Dana Mäja now had a new orientation in life. Instead of spending time and money at the Soddo courthouse accusing and being accused by others, he became a peacemaker and gained a reputation as a reconciler in the community. He who had once raided houses at night and snatched children to sell them in the Gulgula market now began to take in orphans and assist widows.

Among the Wolaitta, Dana Mäja recalled three significant things that took place in the process of spiritual conversion. First, conversion was an individual choice of the will. Standing before the group, converts each made a verbal profession of faith. Second, with hands held high, they denounced Satan and professed their allegiance to Jesus. And third, the converts were expected to demonstrate changes in their behavior: they were to turn away from offering sacrifices to clan deities, to forsake illicit sex, lying, stealing, drinking alcoholic beverages, and to refrain from beating their wife and from engaging in disruptive practices within the community.

When Dana Mäja was elected president of the WKHC council in 1945, he traveled widely throughout Wolaitta preaching the gospel, arbitrating church disputes and organizing church councils. Dana Mäja also played a significant role in attempting to register the National Kale Heywet Church under the Haile Selassie government in the 1960s. To Dana Mäja’s honor, his son Mulu Mäja became nationally known as a parliamentarian from 1968 to 1974 and was later appointed judge in the Ethiopian High Court from 1975 to 1991.

At Dana Mäja’s funeral, mourners arrived from all over southern Ethiopia, including Addis Ababa, to pay homage to a faithful servant of the Ethiopian KHC.

This biography was researched and adapted from “Wolaitta Evangelists: A Study of Religious Innovation in Southern Ethiopia, 1937-1975,” by E. Paul Balisky (University of Aberdeen Ph.D. Thesis, 1997, pp 157-160). Dr. Paul Balisky is a former lecturer at the Ethiopian Graduate School of Theology, a DACB Participating Institution. 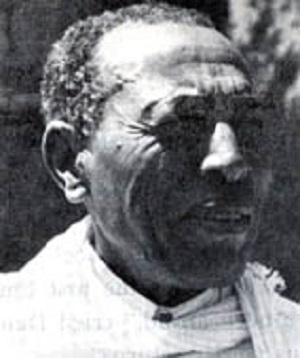 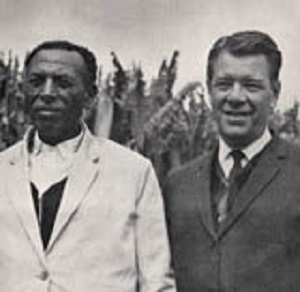