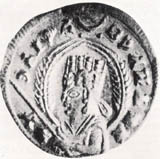 ‘Ézana, (Greek: Aezanas), Emperor (fl. mid-4th century A.D.), was the greatest of the rulers of the Aksumite Empire, of which he was the first Christian Emperor. He was probably the first-born son of his predecessor, Emperor ‘Ellä-‘Améda. His mother’s name is not mentioned in any source as reliable as an inscription, but it appears from secondary sources that she was called Sofya. His brothers, the Princes Se’azana and Hadéfa, helped him in administrative and military operations. A number of inscriptions in Greek, pseudo-Old South Arabian and Ge’ez, located in Aksum, show that his Empire reached its greatest extent after a series of vigorous campaigns directed against the Béja in the north, various border districts of Aksum, the Agwézat to the east, the Säräné of Afan far to the south and the Noba and Kasu on the Täkkäzé, Atbära and Nile rivers. The precise order of these campaigns is in dispute. It is to ‘Ézana’s credit as a soldier and politician that, after subduing the recalcitrant elements of his Empire, he would generally treat them humanely, furnishing them with provisions but breaking their resistance by a policy of resettlement. His royal protocol styled him ruler of Aksum, Himyar, Raydän, Saba’, Sälhén, Siyamo, Bega (Béja) and Kasu, but it is possible that the South Arabian claim represented aspirations rather than fact. On his coins, which are of gold, silver and bronze, he is merely “man of Halén, King of the Aksumites.”

Aksum was presumably very prosperous under ‘Ézana’s rule, and there is evidence for the presence of a large foreign trading community, with exports of ivory, gold, tortoise-shell, hides and spices. Ethiopian merchants apparently supplied Indian goods to Roman and Greek merchants coming to the port of Adulis; this perhaps is one reason for confusion between India and Ethiopia in the Hellenistic world.

The most significant event of ‘Ézana’s reign was his acceptance of Christianity, which had been introduced, possibly under a predecessor, by Frumentius in the early decades of the century. His earlier inscriptions reveal ‘Ézana as worshipping the gods ‘Astär, Medr, Behér and Mahrem (Ares), whose son he claimed to be, but a later inscription contains a monotheist invocation to the Lord of Heaven, and another inscription discovered only in 1969 shows beyond a doubt that he was a Christian. This is confirmed by his coins, where the ancient sun-moon symbol gradually gives way to the Cross. In 356 the Arian Emperor Constantius (r. 337-361) reaffirmed his own breach with the Patriarch Athanasius of Alexandria, who had consecrated Frumentius bishop of Ethiopia some twenty-five years earlier, by writing to the two “most esteemed” brothers Aezanas and Sazanas (‘Ézana and Se’azana), rulers of Aksum, requesting that they should dispatch Frumentius to Egypt to be examined in his faith; the request does not seem to have been complied with.

It is curious that ‘Ézana is unknown to the King Lists, though such is his name on his coins. Tradition has it that the Emperors ‘Abreha and ‘Asbeha ruled Ethiopia when Christianity was accepted, and it seems likely that these prophetic names were applied subsequently to ‘Ézana, and, perhaps, his brother Se’azana, or may indeed have been the baptismal names of the two brothers.

Concrete information about ‘Ézana’s death is lacking. Legendary sources state that he fell fighting on a battle-field in western Ethiopia and that his body was brought to eastern Tegré.

‘Ézana is considered by foreign writers as the Constantine of Ethiopia.