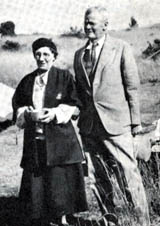 Thomas Lambie was an American medical missionary in Ethiopia. Born in Pittsburgh and raised in a godly Presbyterian home, he received his medical degree from the University of Pittsburgh in 1907 and the same year sailed for Sudan as a United Presbyterian missionary. Soon after meeting missionary Charlotte Clave in Alexandria, Egypt, he married her, and together they opened a new station in 1911 at Nasir among the Nuer, on the southeastern border of Sudan. They crossed the border into Ethiopia in 1919 to help fight a flu epidemic, and later, after he had successfully treated a provincial governor, Lambie was commended to the future emperor, Haile Selassie, who asked him to open a hospital in Addis Ababa. Lambie also became Selassie’s personal physician. In 1927, impatient with the inaction of his U.S. mission headquarters, Lambie launched the Abyssinian Frontiers Mission, which quickly established several new stations in the south and southwest. The same year he merged the new work with the Sudan Interior Mission (SIM). Additional stations were established some 200 miles to the north of Addis Ababa. In 1934 he gave up U.S. citizenship in order to hold property in Ethiopia, but later lost his Ethiopian citizenship after falling out of favor with the emperor, who disagreed with Lambie’s decision to treat casualties on both sides in the war with Italy. During the Italian occupation (1935-1941), Lambie served as executive director of the Ethiopian Red Cross. Although heart problems prompted his return to the United States in 1942, in 1945 he was able to sail for Palestine under the Independent Board for Presbyterian Foreign Missions. His wife died enroute and was buried at Port Said, Egypt. His second wife, Irma Schneck, an SIM missionary from Ethiopia, helped hi open Berachah Tuberculosis Sanatorium in Bethlehem in 1952. He died in Jerusalem in 1954 as he prepared a message to be given on Easter morning at the Garden Tomb. He is buried in Pittsburgh.[1]