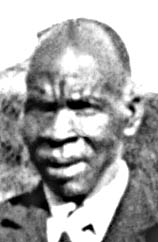 Isaka Mandlate was born into a non-Christian, Shangaan home at Musengui, Chibuto District. His father was Vakane Mandlate. As a boy at home he herded sheep and goats. As a teenager, Isaka went to the Johannesburg gold mines from Lourenço Marques (Maputo) to earn money for lovola (marriage dowry).

One day when he was sick in bed, a preacher visited him and asked him if he wanted to walk with Jesus. He replied, “I can’t even if I wanted to as I’m sick.” The preacher showed him the way and he agreed that it was good. The preacher prayed with him. After recovering he moved to a room with the Christians. He began to realize that he was a sinner and found salvation. Later he was sanctified and filled with the Holy Spirit.[1]

A few days after his return home a traditional doctor came for the annual cleansing ceremonies to remove death from the homestead and assure good fortune in everything. He laid out pieces of cloth representing each member of the family and sprinkled them with blood. Isaka Mandlate told his father that he could no longer participate in these rituals as he had found Jesus Christ as Lord. His father was very upset and declared that two spirits could not be tolerated in the home - either he must return to the traditional worship or leave home. He left and in 1922 went to Chipaja to build a new home and he started a new Nazarene preaching point there.

In 1925 he married Miss Alina Sigauque (?-1959) who had been demon-possessed as a girl of eighteen. At that time her hair was plastered with red mud and she wore heavy brass rings around her wrists and ankles. She wore a necklace with bits of hair, skin and fingernails woven into it. All of these were thought to give protection against evil spirits. Often she would dance until late in the night and she lived in terrible fear.

Early one evening as she passed a mud and grass church she heard singing that attracted her. It sounded so joyful. Joy was totally lacking in her futile, bitter life. She found wonderful joy and peace in Christ that night and no longer feared the evil spirits that were thought to inhabit rats, snakes and owls. God used her testimony greatly and the church came to trust her.

She became terribly ill and so weak that she could no longer feed herself. Her family considered her beyond help since she had joined the Christians. They called a traditional doctor in spite of her protests. She affirmed that she was ready to die - her Saviour was with her. The doctor leaned over her near-lifeless body to feed her a few drops of honey. With superhuman strength she grasped the gourd and splattered the sacred honey around the hut. The doctor left in raging anger, but Alina recovered.

As a girl she was always eager to visit in homes. It was evident that she was motivated by the Holy Spirit and not by people in this work. She would walk the long distance from Chipaja to Mussengi every week to attend church.

After Mandlate and Alina were married they began pastoring the church at Chipaja. Many found the Lord and quite a number became pastors and elders. As a youth, Rev. Samuel Manhique was converted there under Mandlate’s ministry.

While pastoring in the 1930s at Chipaja, massive swarms of locusts arrived one Sunday darkening the midday sky. People ran to the church to warn the Christians. Pastor Isaka Mandlate told them, “We are having prayers; our fields, corn and beans all belong to God.” All but six ran out and joined the other villagers in their futile efforts to drive off the locusts. Next morning the locusts were gone and the fields were bare, but there were six untouched gardens, the gardens of those that had stayed to worship. Some lepers watching from afar reported that they had seen a host of white belted crows (pied crows) sitting around those six gardens and guarding them during the locust attack.

Mandlate became leader of the Chibuto zone and was ordained in 1950 by General Superintendent Hardy Powers. He was a preacher of great integrity.

Alina was always a great help and whenever Mandlate was away she carried on the work of visiting the sick and leading the congregation. The success of the church at Chipaja was very much because of her efforts. Mandlate gave Alina this tribute when she passed away, “We loved one another dearly and she loved her whole family.” Her last words were: “Stay well, Father Mandlate, take care of our children. Remain in the Lord day by day. For myself, I am leaving. I am going Home… Take me Jesus, I am coming to You, I will rest. Jesus, call me, I will rest with You.”[2]

In Bible College Mandlate was called Mukhombo-Vukeya Vantwini (Rhinoceros-Attacker of People). The rhino is a fierce animal that attacks people whenever it meets them. They flee and leave everything when it appears near their homes. Rev. Mandlate would always attack people with the gospel and get them to flee and leave their sins. “Many live today because of that rhino.”[3]