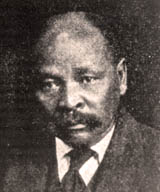 John Dube was an educationalist, an African nationalist and politician as well as as an ordained minister of the Congregational (American Board) Church.

Dube was born in the Inanda district of Natal on 22 February 1871, the son of the Rev. James Dube, a minor Zulu chief of the Ngcoto clan. His father was one of the first ordained ministers of the American Zulu Mission (Marks 1975, 163). His grandmother was one of the first converts of the pioneer American Board missionary Daniel Lindley (David 1975, 503). John Dube was educated at Inanda and then at the American Board Mission Theological School in Amanzimtoti which later became Adams College.

In 1887 he accompanied the missionary W. C. Wilcox to America and attended Oberlein College, working at various jobs to support himself. He returned to Natal where he accepted a teaching post and in 1894 married Nokutela. During this time Dube and his brother-in-law, John Mdima, worked at Incwadi where they established two churches and three preaching stations. Dube never lost his interest in education and what it could do for his people in Natal. After completing his theological training at Union Missionary Seminary in America he was ordained as a Congregational minister in March 1897. During this time he again tried to raise money for an industrial school based on the Tuskegee model of Booker Washington. He would later become known as the ‘Booker Washington’ of Natal (Dube 1909, 30).

In 1901 Dube was able to obtain 200 acres of land in the Inanda district. Here he opened the Ohlange School. Eight years later he went to England to collect funds for the school. By this time there were 139 scholars on the books and the teachers included his brother, Charles Dube (BA), who acted as headmaster, and his wife Adelaide Dube (BSc), both of whom had studied at Wilberforce University, Nokutela Dube, Amy Nhlangoti and Ntombi Zama. Other teachers were John Mdima, Ezekiel Kuzwayo and Irving Nyembezi. There were also part-time teachers helping with some of the industrial courses. (Dube 1909, 24). Dube appealed to the British sense of fairness, pleading for the education of the people of a land that had once been the sole property of the Zulus. ‘They the Boers and the British took it from us, the land of my birth. That little spot of God’s earth which Providence had given us to be our own, our native land ~ the home of our fathers ~ they annexed to the British Empire’ (Dube 1909, 4). Now he needed help for Ohlange School at which the people of Natal, who were part of this empire, were educated.

While Dube was establishing Ohlange School he also (in 1904) founded the Zulu-English newspaper Ilanga lase Natal. The tone of his writing in the paper often appeared radical and during the Bambata Rebellion of 1906 he was arrested as an ‘Ethiopian’ and agitator but was subsequently released. Dube then began to take part in a number of political meetings. He attended the gathering in Bloemfontein at which African leaders discussed the South Africa Bill of 1909. Three years later he founded the Natal Native Congress.

His writing for the paper established his political reputation and in 1912 he was invited to become the first president of the South African Native National Congress. He wrote to the chiefs and members of the SANNC and said: ‘I recognize the hour is come when we, the Native races of South Africa, must be up and doing ~ for God helps those who help themselves’ (Davis 1975, 497). Two years later he led a deputation of the SANNS, which included men such as Sol Plaatjie and Walter Rubusana, to protest the Native Land Act in London. Dube fiercely resisted the Bill and wrote: ‘Why must we, alone of all the peoples of the earth, condemn ourselves to serfdom in order to be permitted to live in our mother-country, while every nondescript from over the sea, be he black or white, is allowed to thrive on the fat of our land, and to erect a home wheresoever he will?’ (Davis 1975, 520).

In 1917 he was ousted from the presidency of the SANNC and returned to Ohlange and Natal, where he remained a member of the Natal Congress. Over the years he was involved in a number of attempts at improving conditions for Africans and fostering better relations between the different races in South Africa. He received acclaim for his work in education and in 1936 he was awarded the honorary degree of Doctor of Philosophy by the University of South Africa. A year later Dube was elected to the first Natives Representative Council, an advisory body to the government. In these later years, then a widower, he married Angelina Khumalo of Pretoria and they had three sons and three daughters.

He died in Durban on 11 February 1946. Dube was a controversial figure. To the Zulu poet B. W. Vilkazi he was ‘a great if not the greatest, black man of the missionary epoch in South Africa’. As Vil-Nkomo, who came from the same mission-educated society, said: ‘No one else in his education generation has accomplished so much with such meager means.’ To John X. Merriman, the liberal Cape politician, he showed what it meant to be an African in British Natal: ‘Dube in conversation gave me a glimpse of nationalism …. How they must hate us ~ not without cause.’ Edgar Brookes, the educationalist, summed up Dube’s influence when he said: ‘He was a Christian gentleman of whom all Natal, Black and White, may well be proud’ (Marks 1975, 164).