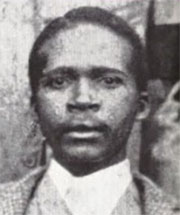 When he was about twelve years old, Bernard Mizeki left his home in Mozambique for Cape Town, South Africa, where he stayed for ten years as a laborer. He worked for white settlers and commuted each day to his home in the slums. He enrolled in an Anglican night school for blacks and refused to drink alcohol, which was what many poor Africans used to assuage their sorrows. With his gift for languages, the young African soon learned English, high Dutch, French, and eight African languages. This led to work for him as a translator of the Bible into indigenous languages.

Soon he became a Christian. Mizeki was prepared for baptism in 1886 by members of the Society of St. John the Evangelist. He then became a lay catechist in Mashonaland, accompanying an English bishop inland to what is now Zimbabwe. Here he built a mission station near the residence of the paramount chief Mangwende. Mizeki set about his work with a routine of daily prayer, attention to his subsistence garden, and the study of local languages, while also getting to know villagers.

Next he opened a school and, with the chief’s permission, moved the mission station to a nearby plateau near a grove of trees where the ancestral spirits of the Mashona were believed to dwell. The Nhowe station prospered from 1891 to 1896, and the number of converts grew. The young catechist had considerable respect for local religious beliefs, suggesting that aspects of the Shona Spirit religion with its monotheistic faith in the high god Mwari were compatible with Christian thought. However, he angered local religious leaders when he cut down trees in the sacred grove and carved crosses into others.

During the Mashona rebellion of 1896 Mizeki was warned to flee, since local African Christians were regarded as agents of European imperialism rather than as independent agents. Mizeki would not leave the Christian community for which he assumed responsibility and, on the night of June 18, was speared outside his hut. His wife and another person racing to find food and blankets to keep him alive saw a blinding white light and heard a rushing wind on the hillside where they had left him. On their return, the martyr’s body had disappeared. The place of his death has become a site for Protestant and Catholics to worship, and each year on the anniversary of his death pilgrims come from many parts of South Africa to pray and to commemorate his life.

Almighty God, whose glory is commemorated in the life of Bernard Mizeki, we thank you for the ministry of your servant among the people of South Africa as missionary, catechist, and martyr. Through the example of this stedfast courage even in death, may your church be called to renewed faith in you, the Great Shepherd of the people. Amen.